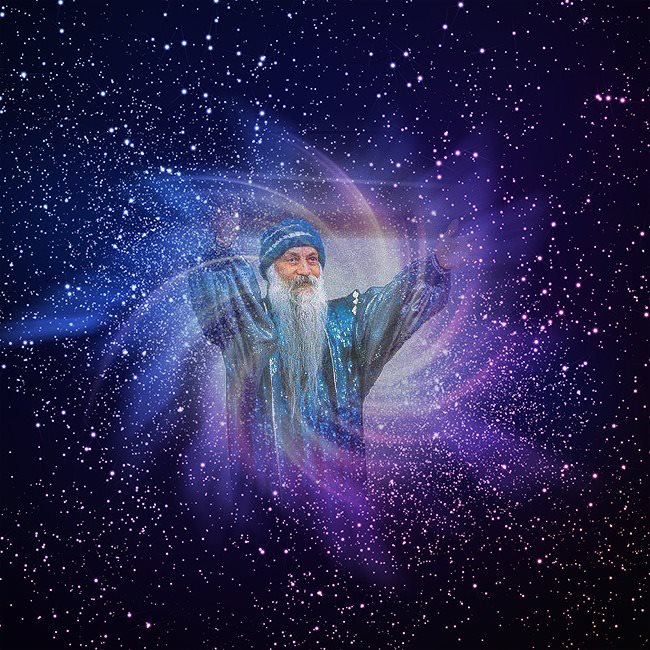 You may have been born in a Hindu family, in a Christian family, in a Jewish family, and they have conditioned your mind that there is a God. They have given a certain image of God, certain ideas about God. And they have created you with such fear that to doubt is dangerous.

A small, tiny kid is being made afraid of the eternal hell where you will be thrown into fire, alive, and you will burn but you will not die. Naturally the doubt does not seem to be so significant to take such risk. And you are motivated that if you believe, simply believe, all pleasures, all joys of life are yours.

Naturally the child simply shrinks from doubting, becomes so afraid that it is not worth it. And belief is so simple. Nothing is expected of you – just to believe in God, the son, the holy ghost… just to believe that Jesus is the son of God, and the messiah… and he has come to redeem the whole of humanity… and he will redeem you too.

Why not be redeemed so cheaply? You are not asked much. Just believe, and everything will be settled in your favor. So why should you choose doubt? You should naturally choose belief. And this happens at such a small age – and then you go on growing, and the belief and the conditioning and the ideas and the philosophy all go on top of it – that it is very difficult to dig and find out that there was a day when you were also full of doubt. But the doubt has been crushed, put out of sight… If you have succeeded in persuading him to believe, you have not done a great miracle. It is very simple exploitation.

Perhaps you are doing it unknowingly; you have also been passed through the same process. And once you close the doors of doubt you have closed the doors of reason, thinking, asking, inquiring. You are no more really a human being. The doors of doubt closed you are just a zombie, hypnotized, conditioned; persuaded out of fear, out of greed, to believe in things which no normal child is going to believe if all these things are not arranged. And once you stop doubting and thinking, then you can believe anything whatsoever. Then there is no question.

The politician wants it, because if you are a believer in a certain religion you are gullible. That shows your gullibility. It is enough indication. If you go to the church, it is enough indication that you are not a man who thinks, who questions, who argues, who will not take anything unless it is proved logically, rationally, scientifically. You go to the synagogue, you go to the mosque – the politician is happy. He wants everybody to go to the synagogue, to the mosque, to the church… it does not matter where you go, but go – because they all do the same.

The basic structure, the strategy, is not different. Hindu, Mohammedan, Christian, Jew, it does not matter, because the basic strategy is exactly the same: close the doors of doubt completely, don’t take any chances, don’t leave any question marks in the person, and fill his mind with all kinds of beliefs. If you look at beliefs you will be surprised. People have believed any nonsense…

If you give freedom to every child, they can make your popes and your imams and your monks just look absolutely idiotic. They can put them in the category of idiots. Just your children… nothing is needed, if you allow them to doubt. But they are not allowed to doubt. And once you become accustomed to a belief, it slowly slowly poisons your whole being. Then if somebody is attacking it, it feels as if he is attacking you.

That has been my trouble. My whole life I have been attacking. Unless I attack your belief system, your ideology, I cannot be of any help to you; I cannot share myself with you. There is a wall, a thick wall. I can go on shouting; you will not hear me. I have to hit the wall continuously, hammer it, at least make a hole in it, so I can see you, you can see me – face to face. And I can revive what has been taken away from you. I can give you back your innocent childhood, and only from there a real inquiry into truth begins. Only from there religion is possible; otherwise you can only talk about religion…

I absolutely want you to become completely free of all jargon that has been given to you by others. And I am not giving you any jargon. So try to understand my different position. That’s why I say this is the first religion of the world.

If you change your religion from Hindu to Christian, or from Christian to Mohammedan, or from Mohammedan to Hindu, nothing will be changing. You will only be changing superficial words, clothes perhaps, at the most; not even your skin will be touched. You will remain the same person.

No, I am not giving you a new set of dogmas, beliefs, creeds, ideologies – not at all. My function is totally different. My function is to take away whatever you have got and not to give you anything in its place… because if I take one stone and put another stone in its place, I am even more dangerous than the man who has put the first stone, because the first stone was getting old and you were getting tired of it, and it was not giving you any nourishment. It was a stone, what nourishment can it give to you? You were carrying the burden, and slowly you may have become aware that it is better to throw this stone. But with the new stone a new honeymoon starts. You start thinking perhaps this stone is the right one.

Once hindrances are removed you will start growing and flowing. You will start searching on your own, and soon you will gain strength and a new power, because even a small discovery on your own will give you such immense happiness that you cannot conceive it. Just a small discovery on your own and you are a different being, because now truth is born in you. It may be just a seed, but the beginning has begun. You will feel a new thrill, which is not possible if I give you a belief, a readymade dogma, an ideology. So I don’t give you anything, I only take away all that you have.